Fifty veiled figures dressed in black today carried out a performance art installation entitled ‘Parts Per Million’ throughout a series of rooms in the ‘BP Walk Through British Art’ at Tate Britain during the art gallery’s official re-opening (Saturday 23 November 2013). The piece critiqued the role that Tate is playing in exacerbating climate change by bolstering the public perception of BP through its long-standing sponsorship relationship.

The art at Tate Britain was reordered chronologically this year. The Liberate Tate performance began in the ‘1840’ room, when the industrial revolution started to significantly impact emission levels, to the present day room with contemporary art created as carbon dioxide levels reached an all-time high of 400 parts per million (ppm). Leading climate scientists consider 350 ppm to be what must be returned to in this century for earth to be safe for human life for generations to come. In each room the Liberate Tate performers arranged themselves in a different configuration and counted aloud en masse the increase in atmospheric carbon ppm during that time period.

‘Parts Per Million’ is the tenth performance at Tate by Liberate Tate: a group that has become internationally renowned for artworks aimed at ending the relationship of Tate and other cultural institutions with oil companies. One of the performers, Fiona Edwards said:

“Any celebration of British art that prominently bears the BP logo is also endorsing that company’s business model which explicitly involves the destruction of a safe, liveable climate. Tate Britain celebrates with a ‘House Warming Party’, but the presence of BP, one of the companies data shows is most responsible for climate change due to its carbon emissions, makes it more of a ‘Global Warming Party’.”

The national collection of British art housed at Tate Britain – art owned by the public – was rebranded the ‘BP Walk through British Art’ in May: in the very week it was announced carbon dioxide levels had reached 400 ppm. A report published earlier this week estimated that BP was responsible for 2.5% of global historic emissions.

Terri Fletcher of Liberate Tate said: “Tate’s vision statement says that it will ‘demonstrate leadership in response to climate change’. Yet oil companies like BP are actively looking for ways to expand their markets and find new reserves at a time when the world needs to be dramatically reducing the amount of fossil fuels that are being burnt. By actively promoting BP, Tate is positioning itself on the side of the fossil fuel companies that are actually creating dangerous climate change.”

There is growing alarm from artists, Tate members and visitors that Tate is providing support to a corporation creating climate chaos and forcing climate-conscious gallery visitors into an uncomfortable position if they want to enjoy art at Tate (the mission of the art museum is to promote public enjoyment of art). Last year Tate said in a reply to a freedom of information request that it had received more representations raising concerns about BP’s sponsorship than any other issue since the oil company became linked to the gallery in 1990.

Since 1990, when BP first attached itself to Tate and its collection, much has changed: the scientific evidence of climate change due to burning hydrocarbons and the negative social and environmental impacts of oil companies, BP in particular, is now clear and far more widely known amongst the public, including art lovers.

Tate has placed BP sponsorship “under review”. BP has dominated the Tate Members Annual General Meeting (AGM) for years. In 2012 Tate Director Sir Nicholas Serota promised Tate members ethical alternatives would be explored so that Tate trustees had a choice not to continue BP sponsorship. A progress report is due at the 2013 AGM on 6 December.

Pictures and footage of the performance of ‘Parts Per Million’ are available for media. 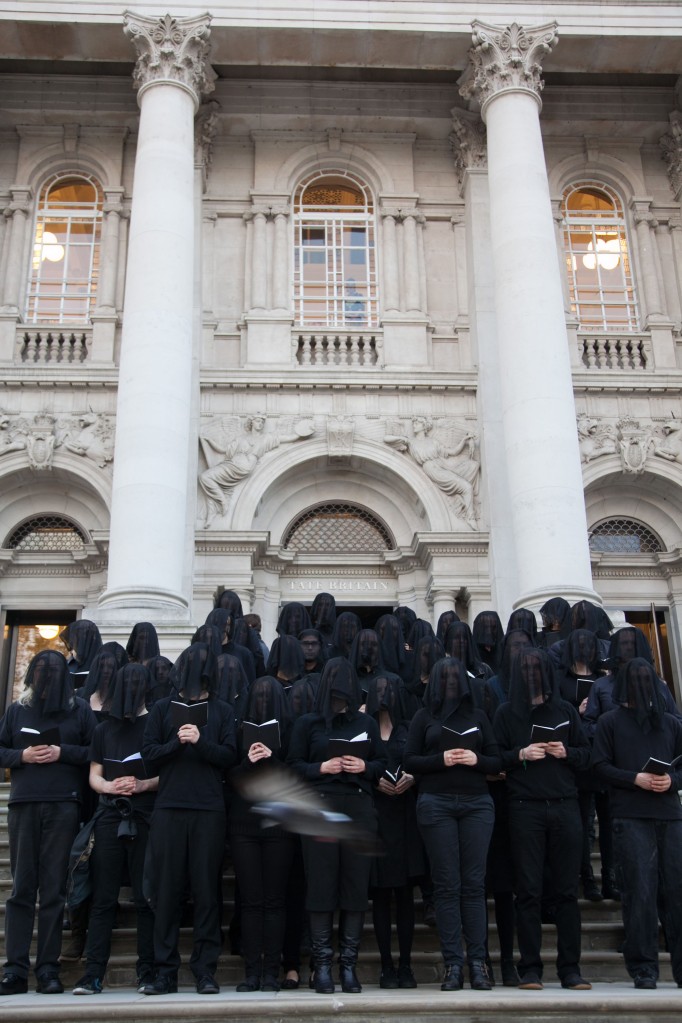